Why You Should Use Rewarded Ads to Monetize Your App

Banner and video ads are a common way to earn money on the web, and also on apps. So it is not a surprise that many app owners at least consider showing ads when planning the monetization of their apps. But most ads are annoying for users. They distract and interrupt them in what they are doing. In the worst case, a bad experience like this can trigger a user to abandon an app or leave a negative review on the app store. By using rewarded instead of traditional ads to monetize your app, you can avoid this kind of experience and its negative results.

What are Rewarded Ads?

Rewarded ads (also called incentivized ads or incent ads) are advertisements that allow users to decide whether and when they want to consume them. In other words, users need to opt-in to see them. After interacting with the ad, they receive a reward, typically a digital item or in-app currency.

What is an Offer Wall?

An offer wall is a list of numerous ads that is composed by an ad network. App owners can make an offer wall available to their users by implementing the ad network’s SDK into their app.

Offer walls are user-initiated. That means, only if users open the offer wall intentionally, they will be able to see the ads and earn rewards. Usually, you can find the offer wall in the in-app shop.

Each ad on the offer wall contains a task and specific instructions on how to complete the task. To get the reward, users have to follow the instructions precisely. Common tasks are for instance: 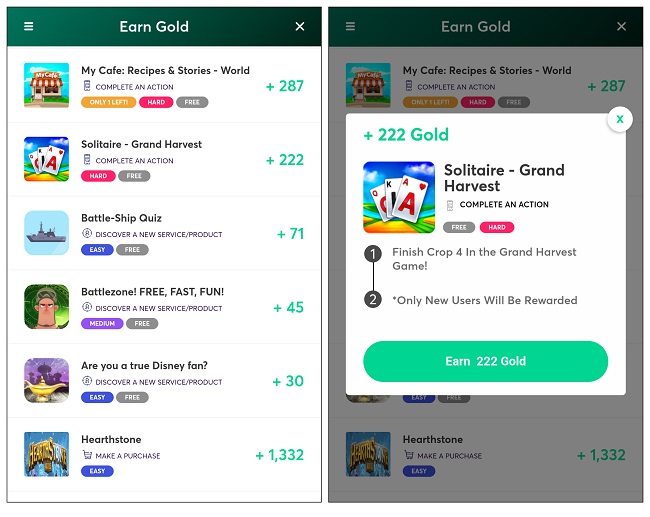 Example of an Offer Wall (left) and a Rewarded Ad (right)

What are Rewarded Video Ads?

Rewarded video ads are on-demand video ads that users can watch in order to get a small reward. Like offer walls, they require the integration of an ad network’s SDK into the publishers’ app.

While offer walls are completely user-initiated, most app owners (in particular in gaming) choose another approach for rewarded videos. They send contextual prompts to users and offer them watching a rewarded video. Usually, they do so at a point in the user experience when a reward would be a great help:

Alternatively, some apps include a rewarded video option in the in-app shop. Like an offer wall, users can access these video ads anytime.

What are the Benefits of Rewarded Ads?

In comparison with traditional ads, rewarded ads have multiple advantages for advertisers and publishers, but also for users.

For users, they are a much better experience than traditional non-rewarded banners or videos. A study by the University of Hamburg found that 66% of users perceive rewarded ads as positive, and only 12% oppose them. These are the reasons:

Rewarded ads have great benefits for app owners (publishers) who offer them to their users, too:

Learn more: WHAT IS APP RETENTION AND WHY SHOULD YOU CARE ABOUT IT?

For advertisers, rewarded ads also have advantages in comparison to non-rewarded ads:

WHICH REWARDS CAN USERS GAIN FROM REWARDED ADS?

As compensation for interacting with a rewarded video ad, users receive a digital reward. Here are some common examples of rewards for different kinds of apps:

For rewarded videos, the reward usually is a small amount of in-app currency, worth between $0.01 and $0.05.

The value of offer wall rewards strongly depends on the task of the ad: Simple actions like installing an app result in small rewards worth a couple of cents. But for actions that require a deeper level of engagement, users receive more valuable rewards. Purchases, for instance, can be rewarded with digital items worth a two-digit amount of dollars.

HOW MUCH MONEY CAN APPS MAKE FROM REWARDED ADS?

The revenues, publishers can expect from rewarded video ads, vary based on the app category, the device OS (iOS or Android), the targeted countries, and the ad network. In general, average revenues on iOS are higher than on Android, and industrial countries outperform developing countries.

The following table shows you the average eCPMs for rewarded video apps per region and OS, based on a study by Appodeal.

The earning potential is even higher than these numbers suggest. The top apps reach eCPMs about 50% higher than the average. So the better your in-app ecosystem is balanced, the more money can you make with incentivized video ads.

Let us compare the numbers from the tables to the average eCPMs for other ad formats:

So, in comparison, the earning potential for rewarded video ads is much higher than for interstitials or banners.

Determining average revenues from offer walls is hard because there are even more factors to consider, such as the level of engagement that is required for completing the rewarded actions and the rewards that users receive. Some of the most successful apps are able to generate eCPMs of $80 and more, but these are exceptions for sure. It is reasonable to expect around $10 to $30, even for new apps.

Rewarded ads are a great way to diversify your app’s income channels. And they are also a good tool to increase user retention and engagement with your app. No matter whether you implement rewarded video ads or an offer wall, your users and your bank account will benefit.

However, be aware, that rewarded ads are not self-selling items. You must promote them to users in the right moments and set the right rewards. Giving too many or too high rewards for consuming ads can harm revenues from in-app purchases. And on the other hand, rewards that are too low will not create the desired effects. So you must plan carefully how to fit rewarded apps into your app’s economy and your monetization strategy.

Learn more: 6 MONETIZATION STRATEGIES TO MAKE MONEY WITH YOUR APP