Paid user acquisition can be an intimidating topic for newcomers in Mobile Marketing. The technical barrier is high, the amount of ad networks, agencies, and technology providers is enormous, and the danger of fraud is omnipresent. While try-and-error in areas like App Store Optimization only costs time, the same approach might result in high costs in user acquisition.

But there is a good way to avoid many of these problems and get new app users also with low experience and limited marketing budgets: Universal App Campaigns (UACs)

In this guide, I will explain to you everything you need to know to run successful UACs:

WHAT ARE UNIVERSAL APP CAMPAIGNS?

Universal App Campaigns are an ad type in Google Ads based on machine-learning. They allow advertisers to promote their apps across various Google-owned channels. Google’s algorithms do the work of finding the best ad placements and optimizing the campaign’s performance, what makes UACs easy to set up and maintain for advertisers.

Read on to learn why these measures will boost your users’ retention.

HISTORY AND SUCCESS STORY OF UACS

UACs were a disruption for app promoters. Historically, they could use Google Ads (then Google Adwords) like SEA managers still use it: They could bid individually on single keywords that they considered relevant to their app. But shortly after the introduction of Universal App Campaigns in 2015, keyword bidding was made unavailable for apps. so UACs became the only option for running app install campaigns.

As Google’s new campaign type offers fewer options for active optimization and also is less transparent about placements, advertisers were and still are skeptical about it. However, Google proofed that its algorithms do a good job: Since 2015, advertisers have generated more than 17 billion app downloads using UACs. The cost per conversion is competitive and in many cases lower than the cost of other user acquisition channels such as RTB campaigns, while traffic quality is good.

HOW DO UNIVERSAL APP CAMPAIGNS WORK?

After a successful campaign setup, Google’s algorithm automatically tests ad placements across their inventory to find the users that match a campaign’s goal. For this purpose, it also uses different combinations of texts, images, and videos to determine the most promising creatives.

The advertiser does not do any optimization work besides adjustments of bids and daily budgets.

WHERE CAN UNIVERSAL APP CAMPAIGNS RUN?

As mentioned before, a Universal App Campaigns ad can appear in various placements: 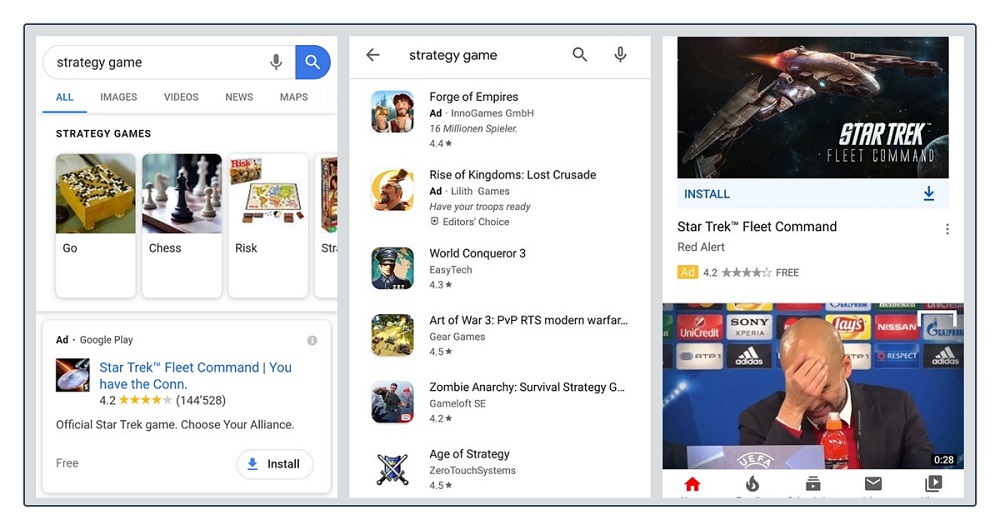 In general, yes, UACs can run on iOS. However, as not all of the placements mentioned above are available, the reach of UACs on iOS is limited. For example, Google has no access to SERPs in Apple’s App Store, so ads cannot be displayed there.

HOW TO SET UP UNIVERSAL APP CAMPAIGNS

As mentioned before, the setup of UACs is rather easy.

First, create a new campaign: Select “app promotion campaign”, pick your app’s OS, and select its name from the list that Google provides.

Continue and give your campaign a proper name. The campaign name will appear in analytics tools like Google Analytics. Thus I suggest to pick a name that clearly identifies the campaign by app, OS, country, language, and campaign goal. For instance, a campaign for a Google Play (short: GP) app that targets English speakers (short: EN) in Canada and has the goal to drive as many installs as possible could be called:

Next, you need to provide this information: 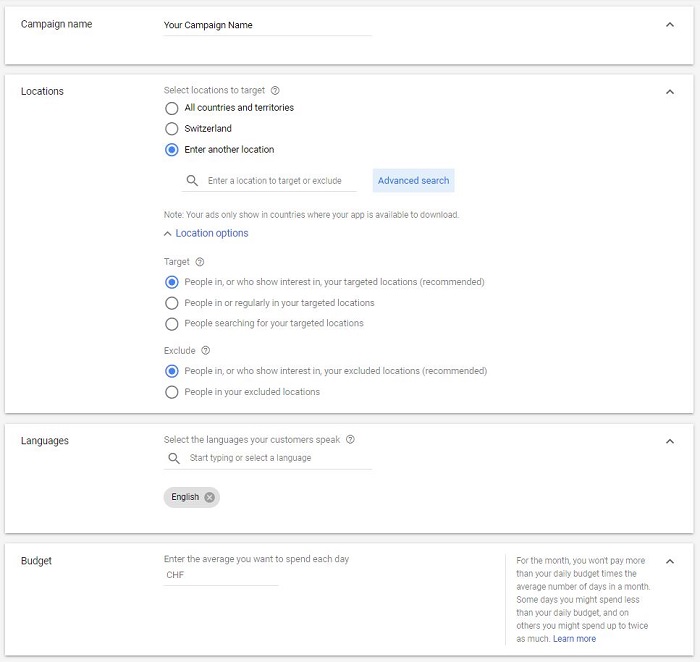 Yes. You can target your campaign at one or more countries, provinces, or cities in the “Locations” section. In addition, you can also define exclude regions from your campaign. Follow these rules:

Yes, you can target specific languages solely, or in addition to geo-targeting. Be aware that this targeting depends on the language that users set on their devices. So a native German-speaker that has his device set to English, will only see your ads if you target English.

No, keyword targeting is not possible with Google UACs, and neither is targeting specific ad publishers. Google’s algorithms decide where your ads appear.

However, you have one option to influence keyword targeting: Reach out to your Google Ads representatives and ask them to blacklist keywords that you do NOT want to target. Usually, they agree to exclude these terms from targeting, given it is a list of not more than 50 keywords. In some cases, exclusions are useful for brand keywords. For instance, if you have a cooperation with another app owner and do not want your ads to show up when users search for his brand name, blacklisting this name makes sense. For most apps, it does not make sense to limit your traffic with keyword exclusions, though.

CAN I SET GOALS FOR UNIVERSAL APP CAMPAIGNS?

Yes, you can define one of three goals for each campaign in the “bidding” section of the setup form:

You can focus purely on “install volume”. When picking this option, Google will deliver as many new users as possible without taking user quality into consideration.

If volumes are your priority but you do not want to disregard user quality, select the additional option “Users likely to perform an in-app action”. You need to define the post-install event that the algorithm should use to optimize. Be aware that you can only use events that your attribution partner sends to Google as conversions (check them under “Tools & Settings” -> “Conversions”).

In case you want to focus on user quality over quantity, select “in-app actions”. You must define post-install events that matter to you too, but in contrast to option 2, you can pick more than one.

No matter which option you choose, you need to define a target CPA. That will be the average price per conversion that Google will try to reach. When the focus of your campaign is install volume (with or without the additional quality option), this will be a target CPI.

In any case, the target CPA is just a benchmark. You will actually pay based on clicks.

Your budget should depend on your campaign goals and on the target CPA you set. Follow these rules:

Be aware that these are daily budgets. You can not set an overall campaign budget. It might happen that Google spends more than your daily budget on single days. But the algorithm will decrease spendings for other days so that the average daily costs will not exceed the budget you define.

For Universal App Campaigns, you can use text ads, static image ads, or video ads.

The only must-have assets are text ads. Google combines them with metadata elements from your app’s product page like the app title or the app icon to create ads for Google Search and Google Play. You have to provide at least 2 and up to 5 ideas for ad titles of 30 characters, and 1 to 5 additional lines of text with up to 90 characters each.

To show ads on the Display Network and YouTube, you can upload 20 images, 20 HTML ads, and link up to 20 YouTube videos to your campaign.

This table summarizes the specs for UAC creatives:

HOW TO OPTIMIZE UNIVERSAL APP CAMPAIGNS

I already mentioned that Google’s algorithms do most of the optimization work. As the advertiser, you only have limited options to impact campaign performance. Here are some tips to get the best out of your UACs:

Universal App Campaigns are a good way to start with paid user acquisition for every owner of an Android app. They are easy to set up and Google’s big reach guarantees good results. Unlike programmatic campaigns, UACs are suitable even for new apps that run on low budgets. Thus, UACs should be part of every app marketing plan.